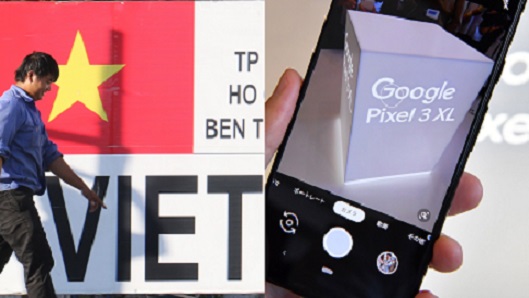 The new round of tariffs announced by Donald Trump against Chinese imports will cause damage among … American companies, which assemble their products in China before exporting them to the United States. However, some of them have decided to react, by moving elsewhere : after Apple in June, which will move part of its iPhone production from China to Vietnam and India, it is Google’s turn to announce the transfer of its factories of Pixel smartphones and Google Home to Vietnam and Thailand. When products are prevented from moving, it is the factories that move.

In the case of Google and Apple, this is an indirect circumvention, via a third country whose imports are not taxed by the United States. This bypass is all the easier as the activity is not very intensive in skilled labour : it is mainly a question of moving screwdriver factories, very intensive in low-skilled labour, from one emerging country to another. This strategy has been observed on numerous occasions in the past : during the solar panel war in 2012, the United States imposed anti-dumping duties on Chinese producers ; the latter immediately reacted by setting up their plants in third countries. As a result, in 2018, nearly 60% of US solar panel imports came from Malaysia, South Korea or Vietnam. Americans still import as many solar panels as before, without collecting the anticipated customs duties. Objective doubly missed.

Another, more aggressive strategy is for companies to set up directly in the protected country. This « tariff jumping » strategy is mainly implemented by companies from emerging countries. It is all the more likely as the displaced activity requires little labour, given the cost of labour in rich countries : they are mainly assembly plants. Such a direct bypass strategy has recently been observed in the United States : in February 2018, following the introduction of 30% taxes on solar panel imports from China, one of China’s leading players in the sector, JinkoSolar, announced that it would set up a production unit on American soil. One could argue that tariff jumping is good news for local employment ; in reality, assembly units are highly automated and require little labour, while the transfer of skills and technology is almost non-existent. Worse still : the establishment of a foreign competitor on the domestic market allows him to better understand the local market and makes it even more challenging. This is exactly what happened in the United States in the 1980s: under Harley Davidson’s pressure, the Americans introduced quotas on Japanese motorcycle imports. Honda and Kawasaki reacted by increasing their presence in the United States, leading to increased competition with… Harley Davidson. Ironically, it was Harley Davidson itself who called for the withdrawal of protectionist measures in 1987, seeing the Japanese market share grow too quickly in the United States. Morality: Protectionism is a policy that often does not produce the expected effects and can even have many adverse effects. It must therefore be used with caution and sparingly. Just the opposite of what Donald Trump is doing.